Link to this page

Thomas Moran was born in 1837 in Bolton, Lancashire to two handloom weavers. The rapid industrialization of nineteenth century England soon mechanized the weaving process and forced Thomas Moran's parents out of their jobs, at which point the whole family was moved to Kensington, Philadelphia, just outside of Philadelphia.

At the age of sixteen, Thomas Moran became an apprentice to a Philadelphia wood engraving firm, Scattergood & Telfer. It was in this position that he began to paint and draw seriously, working diligently on his skills as both a watercolorist and an illustrator. In this he had help and support from his brother Edward, who was an associate of the marine painter James Hamilton.

In the early 1860, Thomas Moran traveled to Lake Superior, where he painted and sketched the landscape of the Great Lakes. Back in Philadelphia he sold lithographs of the Great Lakes before setting off on another trip, this time to London, to see the works of the famed British landscape and marine painter JMW Turner. Thomas Moran replications of Thomas Moran's work so impressed the director of the National Gallery that he was given a private room to work in. Upon returning to the U.S., Moran wanted to go west again and paint but had to wait for the right opportunity. 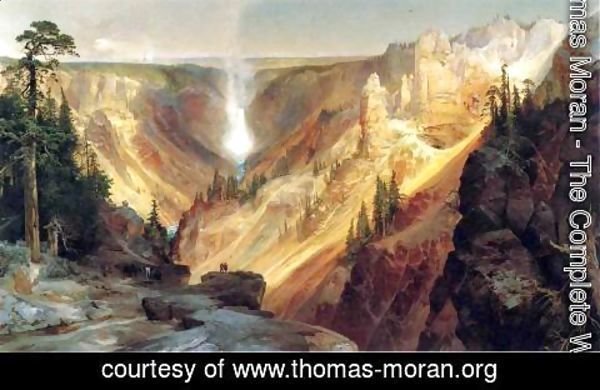 That opportunity came in the form of Ferdinand V. Hayden's 1871 Geological Survey Expedition to what is now Yellowstone National Park. Thomas Moran was hired, along with photographer William Henry Jackson, to document the landscape of the region. He could not have chosen a better trip or companion, as the combined talents of Moran and Jackson in documenting the geysers, hot springs, canyons and cliffs of the "Yellow Stone Territory" would be instrumental in persuading Congress to set the land aside as a National Park. It was also the beginning of a fruitful partnership, as Thomas Moran would accompany Jackson again on Major John Wesley Powell's expedition to the west in 1873.

It was on this trip that Thomas Moran painted his two most famous works, "The Grand Canyon of the Yellowstone" and "The Chasm of the Colorado," both of which were purchased (for a previously unheard-of sum of $10,000 each) by Congress to be displayed in the Capitol in Washington. With the money he was earning from his newfound fame, Thomas Moran again traveled to Europe, this time to Venice, where he purchased a gondola and shipped it back to the United States in order to use it as a model for a variety of Venice scenes he produced after 1890.

Thomas Moran moved west permanently in his old age, settling in Santa Barbara, CA and traveling to Acoma and Laguna pueblos to paint the scenery and lifestyle of the native peoples. He died in 1926 of natural causes. (From Medicine Man Gallery)

Report an error on this page